The Things They Carried: The Russian Oligarch

When I texted Alexander Lebedev -- the KGB spook turned banker and media mogul -- explaining the conceit of this feature, he wrote back: "I don't have anything, not even money." The billionaire (estimated assets, according to Forbes: $2.1 billion) added a smiley face.

We met in his two-story, taupe-colored Moscow mansion, with its plush leather chairs and a dozen scurrying assistants. "Yesterday I checked my bank account," Lebedev said with a smirk. "I had 61 million rubles." That's $2 million. So where's the rest? "All my assets are in potatoes," he joked, referring to his National Land Company, Russia's largest potato producer. What he meant is that his money is tied up in "productive assets": a fifth of the airline Aeroflot, shares in natural gas giant Gazprom, a Crimean hotel complex, and a slew of British and Russian newspapers, including the Independent. "Even if I wanted to, I couldn't take my money out," he told me. Lebedev's reluctance to open his pockets goes beyond his bank account. "I don't like any objects," he insisted, standing in front of a model airplane and a set of Chinese ivory blocks. "Ideally, I would move around the world totally empty." 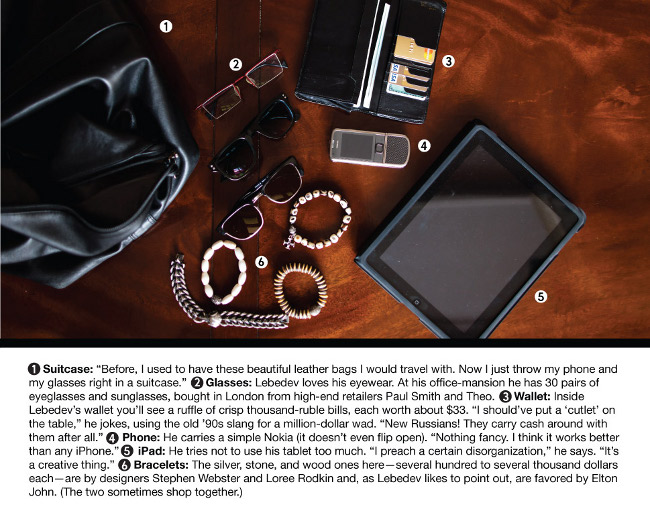