Independent to cease as print edition

The Independent and Independent on Sunday newspapers are to cease print editions in March, leaving only an online edition, the owner has said.

Announcing the "digital-only" move, ESI Media said "some redundancies among editorial employees" would be made.

But it said there would also be 25 new "digital-content roles".

ESI has also confirmed it will sell its sister title, i newspaper, to Johnston Press, for an expected £24m, subject to approval from Johnston's shareholders.

Evgeny Lebedev, ESI's owner, said: "This decision preserves the Independent brand and allows us to continue to invest in the high-quality editorial content that is attracting more and more readers to our online platforms."

The last print edition of the Independent will be published on Saturday 26 March, while the last Independent on Sunday will be on 20 March.

It's easy to forget how groundbreaking the Independent was when it launched. It looked strikingly modern, it came with none of the partisan baggage of 1980s politics and in an era of bitter industrial disputes that blighted rivals such as the Times, it carved out a large readership.

At its peak sales hit around 428,000 copies a day. Twenty-five years later, the number of copies being sold on a weekday in newsagents is rather closer to 28,000.

This is an announcement that has been long awaited. The problem about switching to digital is that the big British print newspapers bring in revenues in hundreds of millions of pounds while even the best digital products make only tens of millions.

The long decline in print readership has led to many declarations that print will be dead in a few years' time, but until a way is found to make more money out of digital, they will hang on to their print readers to the very end.

ESI said the number of staff affected would be "confirmed following a consultation period".

It said a "significant number" of staff would move to Johnston Press, which also own the Scotsman, the Yorkshire Post and some 250 other local and regional newspapers, as part of the sale of the i newspaper.

The closure of the Independent's print editions will have "no bearing on the status" of the London Evening Standard - also owned by ESI - the company added.

The Independent's editor Amol Rajan tweeted: "Impossible to over-state how proud I am of the most dedicated, clever, industrious and brave staff in the history of Fleet St."

The Independent was set up in 1986, and at its peak had a circulation of more than 400,000 copies, but December's figures showed it lagging far behind rival national newspapers.

Russian billionaire Alexander Lebedev took control of the loss-making newspapers in 2010 when he bought Independent News for Media for £1.

In 2014, his son Evgeny told the BBC the Independent could be sold if someone "offers the right price" - but he was "not actively trying to sell it". 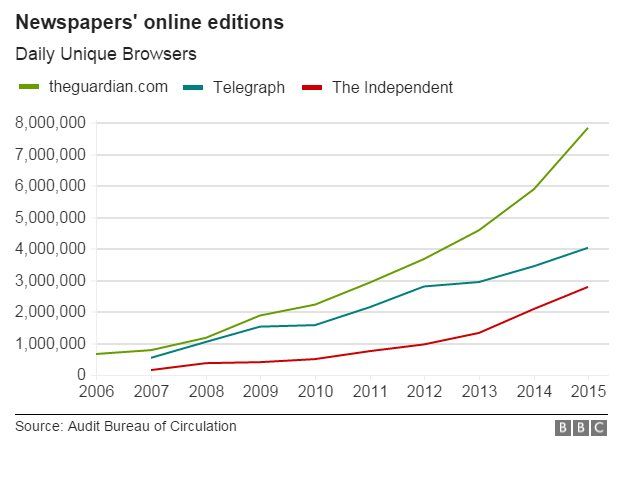 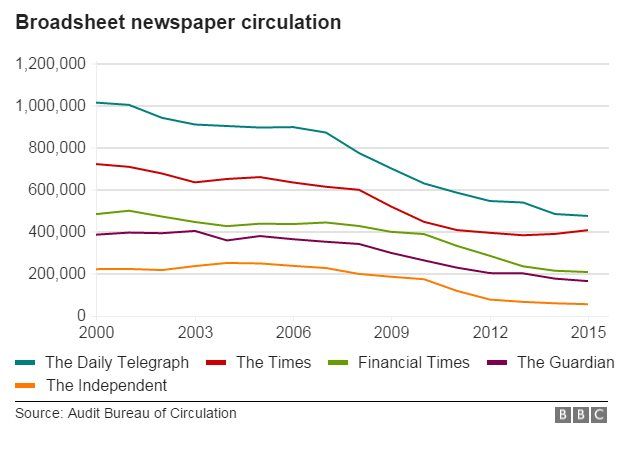 "I went there because I was inspired", he said. "Their mission was to be the best. I thought it was a noble mission, and even if it all goes horribly wrong, it's worth a try."

Many experienced journalists were among those who risked their careers and turned up "with typewriters" to launch the title, he said.

"For four weeks before launch dates, there were dummy runs every day. There was a very strong sense of purpose."

Journalists from other publications and broadcasters paid tribute to the title and its staff.

ITV political editor Robert Peston tweeted: "Closure of @Independent as print title is heart-rending, terrible. Such an important paper in its day."

The BBC's Andrew Marr, a former editor of the Independent, replied: "Not in its day, Robert. Its day is now!"

Editor of the Independent on Sunday Lisa Markwell tweeted some of the paper's most memorable front pages, adding: "My proudest professional achievement has been to preside over the brilliant, brave @IndyOnSunday team for 3 years."

Stephen Glover, a co-founder of the Independent, said the paper was selling "so few copies that it doesn't really make sense to go on printing it every day".

Speaking on Thursday - before the move was confirmed - he told BBC Newsnight: "If it is true then I think it will be the first of many papers which stop their print editions and have another existence online."

He said the Financial Times and the Guardian could also stop producing print editions "within the next few years", and in 10 to 15 years there would not be "very many" printed newspapers.

Mr Glover said there was a "longer question" about whether online-only papers could support the same number of journalists and do the "same sort of journalism" as printed ones.

The Times' media editor Beth Rigby said the industry had been in turmoil for many years, "and now we're beginning to see the hard end of that", adding that the Guardian and Telegraph were also facing major changes.

Writing in the Guardian's website, professor of journalism Brian Cathcart predicted that all UK national newspapers would eventually go out of print.