Evgeny Lebedev: As a child, I saw young elephants at play - let’s ensure with the Giants Club they never stop

As African heads of state gather for a summit dedicated to ending the killing of these magnificent animals, Evgeny Lebedev tells of his own lifelong passion for conservation

The first elephants I knew about were fictitious.

Every night, as my grandfather tucked me in, I would hear how Vladimir and Evgeny would get stuck in mud holes and tramp around the African forests having adventures.

It was how my grandfather, a leading Soviet biologist, instilled in me a love of wildlife.

A few years later, accompanying him on a government trip to Africa, I came face to face with the real thing. Two hours from Nairobi, I saw from my car a small herd congregated around a waterhole.

My grandfather explained that all the adults were female, except for two young males.

He named them: Vladimir and Evgeny.

As a 14-year-old I couldn’t help but be moved by the sight of the young bulls playing and sheltering under their parents. Vladimir and Evgeny were young enough then to still be alive now, and they may well be.

But as all supporters of elephant conservation know, the numbers suggest otherwise.

They could be trumpeting around the African bush. But it’s more likely all that remains of them is an intricately carved trinket on a Chinese mantelpiece.

When I saw that herd aged 14, there were about 1.2 million elephants in Africa. Three quarters of those, including most likely many of the elephants I saw that day, have since been hunted for their tusks — and the rate of slaughter in the last decade has been increasing.

This is why it is so important that the Giants Club inaugural summit — a unique gathering of African heads of state, corporate leaders, philanthropists and scientists dedicated to ending the illegal killing of elephants and safeguarding the landscapes in which they roam — starts tomorrow.

Never before have so many African leaders gathered on African soil with the express aim of addressing the poaching crisis.

President Uhuru Kenyatta of Kenya is hosting and will be joined by fellow Giants Club members President Ali Bongo of Gabon, President Yoweri Museveni of Uganda, and senior representatives of President Ian Khama of Botswana.

These four countries are home to more than half of Africa’s remaining savannah elephants, and three quarters of its forest elephants.

Barack Obama is to send a message of support delivered by deputy secretary of state Heather Higginbottom.

Helen Clark, head of the UN Development Programme, and Ibrahim Thiaw of the UN Environment Programme, will attend, with Jorge Rios of the wildlife and forest crime programme at the UN Office on Drugs and Crime.

I am delighted that the nation of my birth, Russia, is attending, as is France, whose environment minister will speak at the event.

Representatives of global finance and philanthropy include Richard Branson and Jody Allen, president of the Paul G Allen Family Foundation set up with her brother Paul, Microsoft’s co-founder.

African musicians including pop band Sauti Sol will perform at a gala dinner. 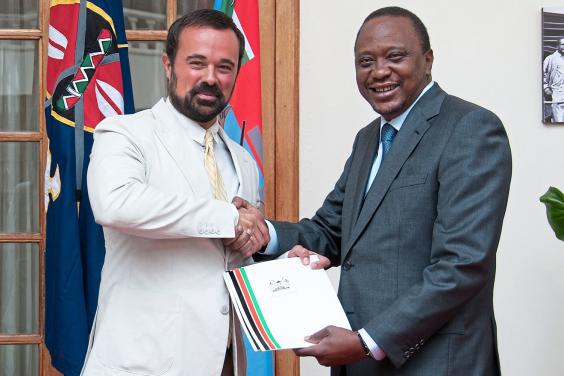 The Giants Club was founded on the conviction that no nation, UN body or NGO can save elephants by acting alone.

By bringing together a wide range of like-minded folk with an interest in preserving wildlife for future generations, the club aims to protect 50 per cent of Africa’s elephants by 2020.

It’s an objective I firmly believe in and why I’m so proud to be the Giants Club’s patron. The summit will go a long way to helping achieve that objective.

As Kenya environment secretary Judi Wakhungu said to me: “This is not another talking shop. This is an extraordinary opportunity for us to show the world that we know how to stop poaching.”

Elephants may be iconic, intelligent, grand in size and symbolism, but they are also an asset, a crucial ingredient in Africa’s future prosperity.

As Mr Kenyatta wrote in this newspaper recently, the continent depends on its wildlife for tourism and economic stability. Elephants, it must be emphasised, are worth infinitely more alive than dead.

My grandfather always wanted me to be a zoologist. I may not have achieved that, but I still gained from him a love of nature and a lifelong commitment to conservation and wildlife protection.

That is why I am delighted that this momentous gathering is taking place. The Giants Club is helping achieve just what he taught me to care about.